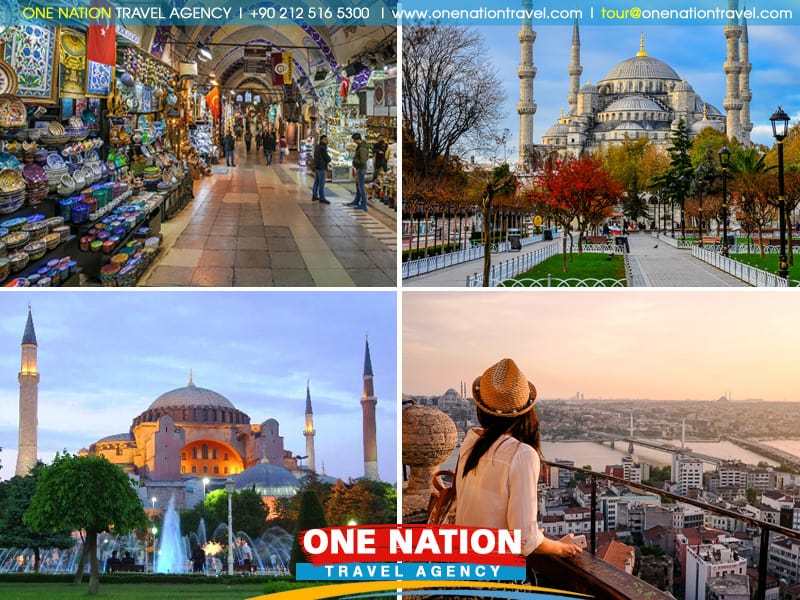 Constantinople, the center of the Byzantine Empire which lasted over a thousand years, later became Istanbul, the capital of the Ottoman Empire for almost 500 years. The city is a mixture of Europe and Asia, a unique urban composition. A stroll around Sultanahmet, inside the city walls, among mosques, museums, and the Great Bazaar is a trip through both history and daily life.

Marvelous, incredible and beautiful are just some of the adjectives used to denote the St. Sophia Museum aka Hagia Sophia. Once was a place of worship (first as a church and later a Mosque) and now functioning as a museum, this monument is important in both Byzantine and Ottoman Empires. Impressive domes, unique designs of pillars, stunning interior embellishments make this one of the greatest architectural achievements in the country. Mosaics covering surfaces, stone inlays, columns, bronze and marble doors are other key features. Turkey holidays will be incomplete without a visit to this amazing architecture.

Istanbul’s most photographed site, Blue Mosque is the last standing mosque during the Ottoman Empire. Featuring a massive dome, six minarets, and eight smaller domes, this is a fusion of traditional Islamic and Byzantine architectural elements. As it is dubbed, around 20,000 handmade blue tiles of rose, lily, tulip, and carnation design adorn its walls. Structure complex consists of the madrasa, fountain, sultan resting mansion, Turkish bath and hospital. The place still stands as an active place of worship as well as a major tourist attraction making it as the most important places to visit in Turkey.

In centuries past, Hippodrome was used as an arena for chariot races, court ceremonies, parades, and coronations. More than 8 different games could be conducted throughout the day and it exemplifies the power of the empire. Four key attractions to see at the Hippodrome are German fountain, obelisk from Egypt, serpents’ Column and Walled Obelisk. There are also hundreds of golden statues, monuments, and columns resembling the glory of Constantinople history.

Covering a huge area, Grand Bazaar is one of the oldest as well as the biggest market places in the world. There are over 60 streets with 21 entrances under on roof. Once a major trade hub, this is the best place to pick up gadgets, clothing, jewelry, souvenirs, spices, vegetables, and fruits. Even though Turkey has many shopping malls, the charm of grand bazaar continues to be a big attraction. Plenty of restaurants in the market allow you to dine-in when you get tired of shopping.

One of the popular sites to visit in Turkey, Topkapi palace stands out not only for its architecture but also for its history and culture. Spanning around 70 hectares, the palace was the home of the Sultans of the Ottoman Empire, their families, and staffs. Though a large portion of the palace off-limits to visitors, one thing they can access is a highly embellished harem. Also admire the treasury, kitchens and imperial collections inside the palace.

If you are pondering about the best of the places to go to Turkey, then Istanbul is the capital choice in every aspect.

Click here to book an Istanbul City tours
← Back Next →

Share This
Need Help? Chat with us
Start a Conversation
Hi! Click one of our member below to chat on Whatsapp
The team typically replies in a few minutes.
Can B.
Customer Support